The information, opinions, and conclusions I have presented in Clear, Concise, Compelling were developed over a 20-year period between 1987 and 2006. Because I was delving into this subject long before I committed to writing a book, there are bound to be several books not listed below that influenced the material. I will add them to the list when memory or happenstance aids me.

I have not listed dictionaries, but I must mention my beloved Random House Dictionary of the English Language (second edition, unabridged). In the days before Dictionary.com, a decent dictionary was indeed a great asset.

The fully-revised second edition of Simon’s popular writing guidebook is being printed. You can pre-order the book now for delivery during May 2021. 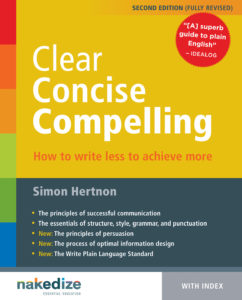